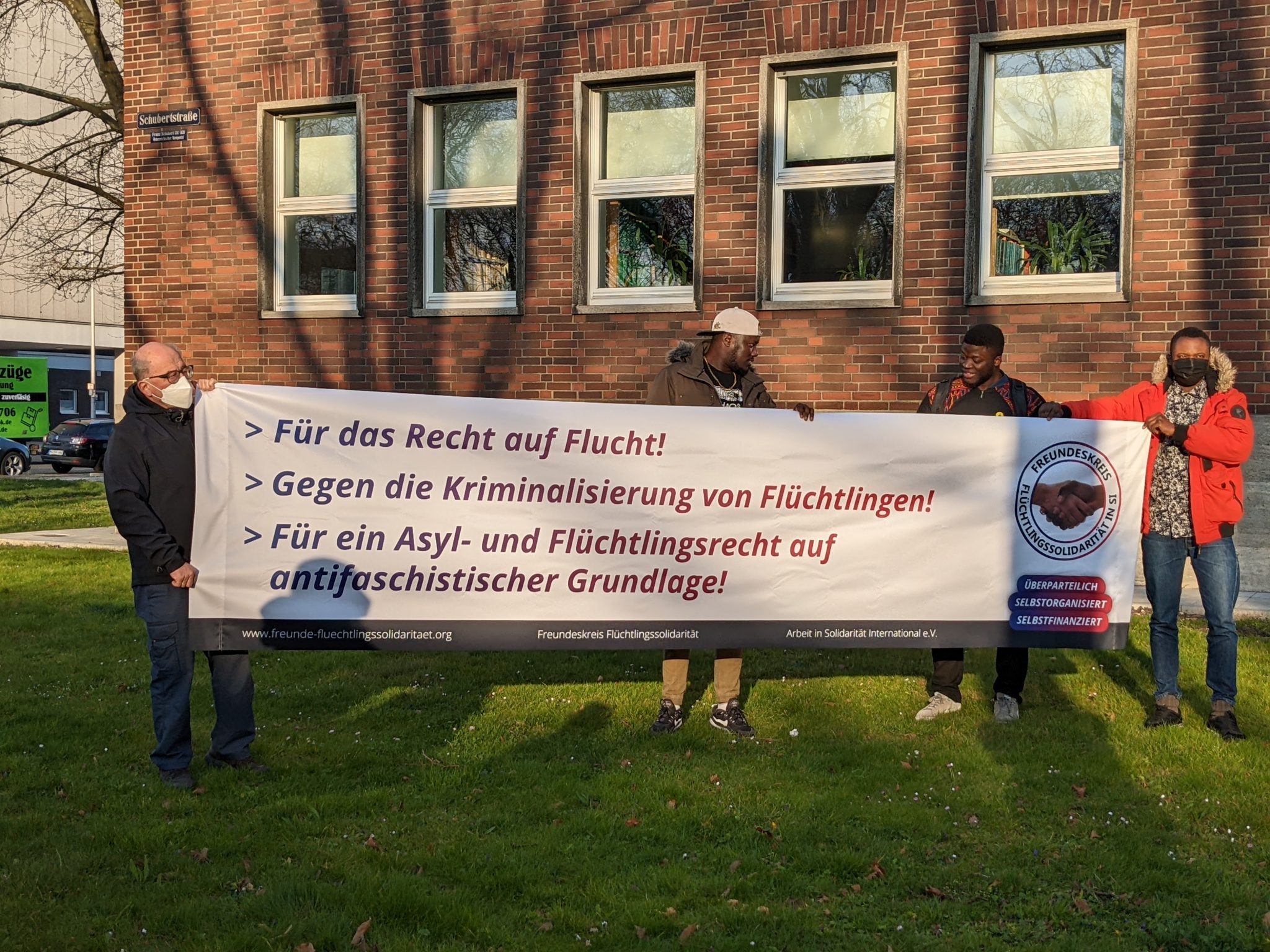 Dear friends of the Friends of Refugee Solidarity!

From my point of view, the press release »David versus Goliath« underestimates the importance of this conflict not only in refugee policy, but in general in the fight for democratic rights and freedoms. She also strongly assumes that everyone knows the overall context and the dimensions of this debate. But that cannot be assumed!

The »police operation on May 3rd in the LEA Ellwangen« is mentioned in passing. This police operation in 2018 and the nationwide, day-long media campaign that followed was one of the worst refugee-political repressions and hate campaigns in the history of the Federal Republic. Numerous former residents of the LEA had successfully prevented the deportation of a colleague from Togo. As an act of revenge and response to this, the Kretschmann-Greens/Strobel-SPD state government carried out a night-time attack on the sleeping refugees a few days later by more than 500 police forces wearing black masks and equipped with dogs. The often traumatized people were dragged out of bed and within minutes tied up and "secured" - unless they had jumped out of the window in panic. There followed a day-long campaign across all radio and television stations and the entire newspaper forest: there should be no "legal vacuum" in this republic. However, the spirit in the LEA at that time was not “legally free”, but guided by a pronounced humanitarian, solidarity-based understanding of the law.

From this situation emerged the first self-organized refugee activities with press conferences, demonstrations, the first trials, etc. Around 100 militant protagonists emerged from the refugees in association with a broad spectrum of people in solidarity »from religion to revolution« from Germany. One of them is Alassa Mfouapon – that is by no means a David is: a lone fighter who, by the way, is dead at the very end of the story. Rather, it is the face of a non-partisan movement and organization of refugee solidarity, which has been growing quantitatively and developing qualitatively in terms of program and organization.

For this role as a face, spokesman and confidant, buckets of hate and hate speech were poured out over him - with protagonists such as the BILD newspaper or Alice Weidel from the AfD. As a further punitive measure, he was brutally deported to Italy.

In an intensive consultation with the friends who had fled, the allies in Germany and the best lawyers, the lawsuit against the state of Baden-Württemberg because of this martial police operation, which has now been heard for the second time, arose. The first instance ended with a resounding slap in the face for the state government, in which the disproportionate nature of the police operation at the time was determined. At that time, the fact that the basic and human right of inviolability of the home applies to refugee accommodation was not discussed. As is now becoming apparent, the First Senate, chaired by the President of the Administrative Court of Baden-Württemberg, decided differently on this important fundamental issue: Refugee shelters are apartments! This is so important because it is not about an individual decision, about individual house rules, but about a fundamental determination of the expansion of democratic rights and freedoms and the affirmation of the human dignity of refugees. This in a situation in which the federal government is practicing extreme, ultimately racist, unequal treatment of refugees.

Last but not least, this depiction is also a surprising disdain for your communal solidarity

Apparently, it is also becoming apparent that the lawsuit will be dismissed in the specific individual case. This related to the search of AM's premises based on the coordinated statements as well as memory gaps from police officers and their standardized corrections compared to the last hearing. The representation that AM let the police officers into the room voluntarily is ridiculous and unacceptable. Appropriate conclusions must be considered! However, the fact that your press release loses just three lines about the foreseeable fundamental success misjudges the dimension of the dispute and the signal that emanates from it, especially in the current situation. This is underlined by the fact that the presentation is made without the overall context and opponents of the dispute and the treatment of the "twin success" by the first and second instance. Last but not least, this representation is also an astonishing disdain for your collective solidarity, tenacity and competence in connection with the very good lawyer. The detailed description of everything that did not go according to plan almost speaks of disappointment about the bourgeois judiciary. Surely he will issue a press release after receiving the written judgment and maybe the point of view can then be reconsidered here?

Warm greetings and continued success for the Circle of Friends and its allies, not least in their work in the new current refugee crisis.