Press release from the Friends of Refugee Solidarity on the »Mannheim Judgment«, delivered on April 13, 2022 Alassa Mfouapon ./. State of Baden-Wuerttemberg 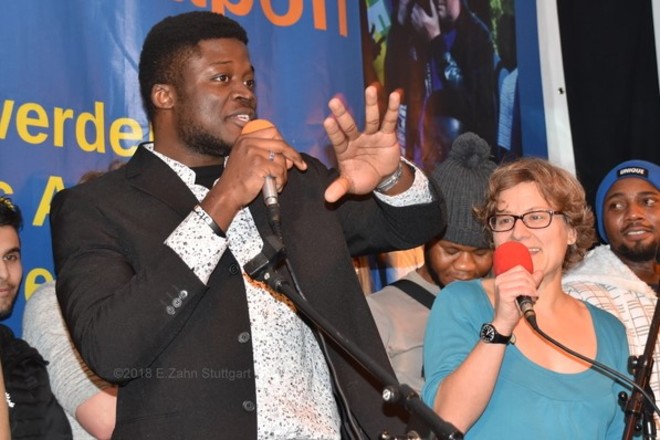 Normally court judgments are announced at the end of a hearing or possibly at the end of the session day. In the case of the verdict on Alassa Mfouapon's appeal against the state of Baden-Württemberg on the illegal police operation on May 3, 2018, the first senate of the Administrative Court of Baden-Württemberg needed more than two weeks to formulate its verdict. Plaintiff Alassa Mfouapon said: "The judgment contains extremely significant advances in the democratic rights and freedoms for refugees and yet manages the feat of not upholding my appeal."

Alassa Mfouapon further emphasizes, “that the political protest and the legal steps against one of the largest police operations against refugees in Germany, which were initially viewed with some skepticism, played a central role in the progress made. In connection with the dispute, great progress was also made in the self-organization of the refugees and the solidarity movement associated with it.

He characterizes in detail seven significant political achievements of the judgment:

Despite all these remarkable and politically significant statements, the somersault mortale then follows: the concrete complaint of Alassa Mfouapon is rejected. His room was not - as would be unlawful - searched, but only - as it is lawful - enter been. The difference is that he didn't fight back! He had to be handcuffed at least to express his resistance. Petra Sauter, spokeswoman for the Friends of Refugee Solidarity in North Rhine-Westphalia: 'Here the verdict is downright cynical. Who actively defends themselves in the environment of heavily armed police forces with police dogs who had the express order to use violence? And by the way: Alassa Mfouapon was convicted of resisting police officers in another trial, thus justifying brutal measures during his deportation.«

In plain language: in principle, the lawsuit is completely correct and appropriate, the state government and the police have seriously violated human rights - but Alassa Mfouapon's appeal is dismissed! Where else would one end up if a simple refugee were given justice against a state government led by Green Prime Minister Kretschmann and a police force led by Black Interior Minister Strobl? A refugee who cheated death in the internment camp in Libya and during the dramatic escape across the Mediterranean Sea, who, despite a shit storm of right-wing agitation from BILD to Alice Weidel and brutal deportation, has retained, even strengthened, his dignity and backbone?

But apparently the court itself is not entirely comfortable with this verdict. A decision follows – completely unusual – that documents another significant success:

Alassa Mfouapon and his fellow campaigners also see all of this as a challenge not to let up in the consistent fight for refugee rights.