Speech Alassa M. at the rally in Mannheim 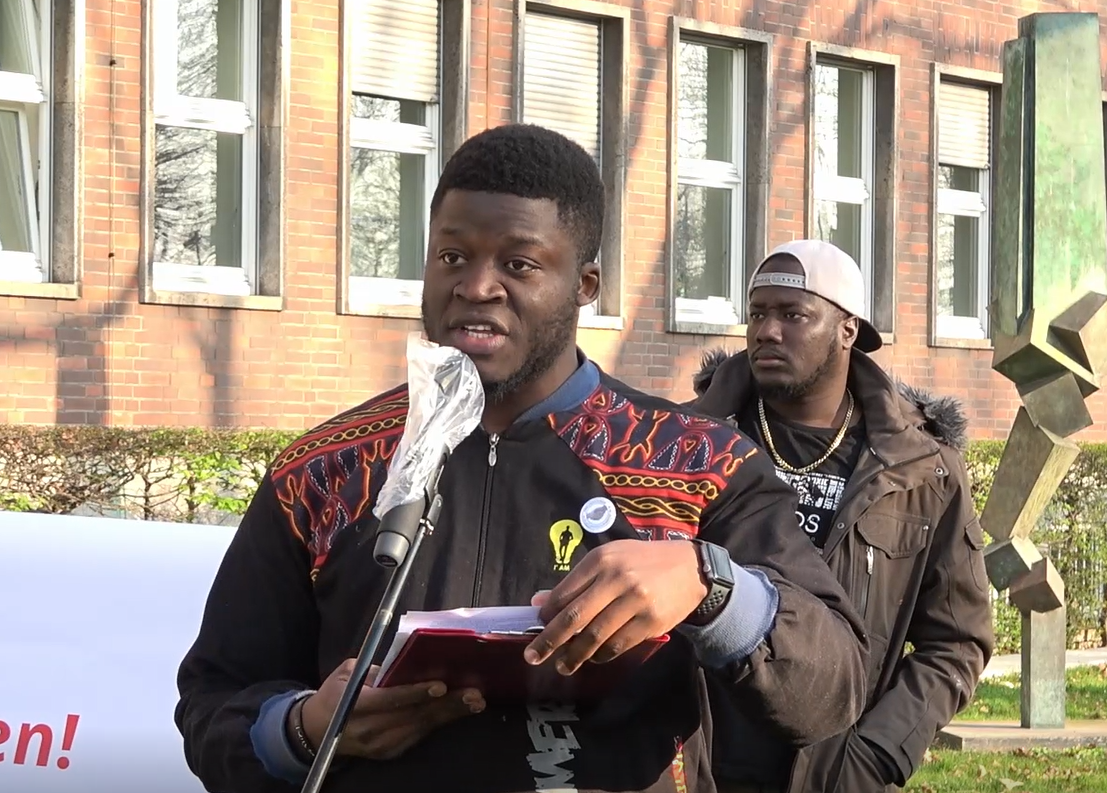 We still meet today, more than a year after our partial success in Stuttgart against the state of BW. I would like to extend a warm welcome to you all on behalf of the Circle of Friends.

In the fight for democratic rights and freedoms, we stuck to our decision because we believe that everyone has the right to seek asylum in a country of their choice and that country has a duty to receive them and grant them asylum.

Today we are fighting for our rooms in refugee accommodation to be considered private apartments so that they have the right to inviolabilityewith the apartment can also enjoy. That's why I made this appeal.

The events of the last few months show once again that this continent of human rights still knows what it means to have the right to flee. He also knows that no matter where they are, everyone needs protection and needs to be able to live without fear.

Unfortunately, apart from what the TV would have us believe, this is pure delusion.

I don't want to shock you, but the asylum policy in Germany and Europe is a disaster and continues to be racist.

If you want quick access to housing, work and asylum without any procedures, you have to be Ukrainian. Nothing can justify such an asylum policy unless it is "constitutional racism" is.

I have been in solidarity with the Ukrainian refugees since the beginning of this war and I want to fight together to ensure that this right that was granted to them also applies to all refugees. When someone flees their country, for whatever reason, they must be taken seriously.

We have refugees from all parts of the world and I condemn dividing refugees into class distinctions. There are no first, second or third class refugees.

"Quickly remove Alassa from Germany because he is committed to the democratic human rights of refugees!”

What happened to the police when I was deported in Ellwangen in 2018 was an illegal action and that is why we partially rejected the decision of the jury in Stuttgart last year.

A proper deportation takes place in compliance with and clarification of the guidelines with a decision, which was not properly granted to me, since the police officers had a task to fulfill: “Quickly removing Alassa from Germany because he stands up for the democratic human rights of refugees!”

You planned the whole deportation without checking the legal consequences.

under these conditions, I could not consciously act on things because I was put under pressure.

None of the normal required court search warrants were followed as they entered my room without knocking and waited for me while others picked me up in the restroom.

This is called „unlawful„ marked but the question of my apartment remains whether it was protected or not.

Refugee shelters are in fact apartments because, contrary to the law, we stay there for several months or even years. We try to demonstrate this to demand respect.

All of my struggles have so far been punished by the old government under Horst Seehofer, because every time we were successful, I either paid with a fine or a deportation order. But believe me, I'm in Germany for flight reasons and I'm not asking for anything but my rights. Today he is no longer there and I expect clarity in my asylum process from this government.

Today is circle of friends refugee solidarity twice as strong as before and has spread throughout Germany and enforced its principle of self-organization of refugees. This proves that we are aware of our task, the refugees call on to organize themselves and will never give up.

Whatever the outcome of this process, we will continue to fight and fight for our rights and the rights of all refugees around the world.