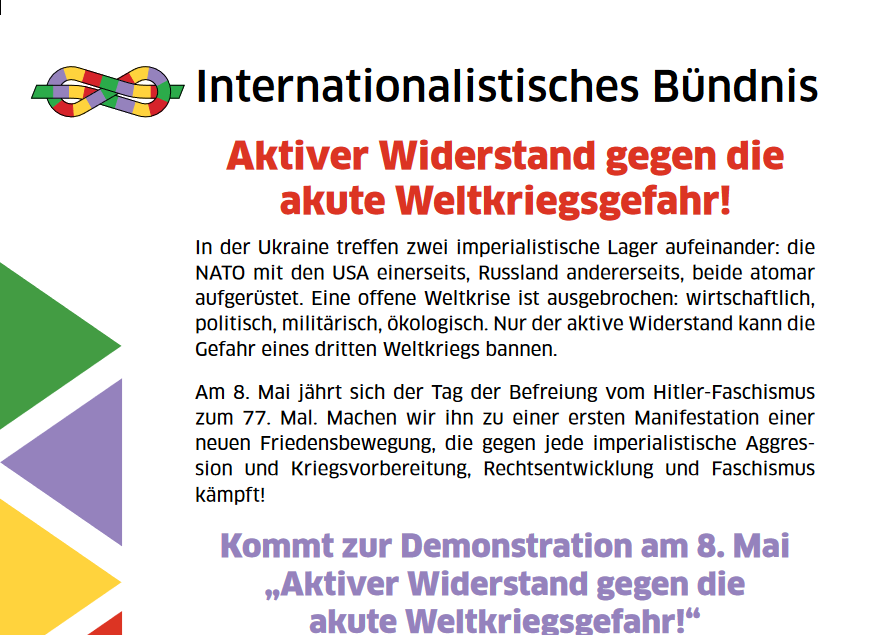 coming on Sunday, May 8th for the big nationwide peace demonstration from Essen to Gelsenkirchen! Bring your friends, acquaintances, neighbors, work colleagues ... - organize the journey and participation together.

You can find out more here in the flyer of the Internationalist Alliance (LINK), which calls for demonstrations and rallies in Essen and Gelsenkirchen.

Now the German federal government has also decided to deliver heavy weapons to Ukraine, as other NATO countries have been doing for a long time. However, this has nothing to do with the alleged help for the Ukrainian people against Russia's brutal war of aggression, but leads to a further escalation of this imperialist war and increases the acute danger of a third nuclear world war. Many refugees have themselves had bad, painful experiences with wars in their countries of origin and have often had to flee as a result.

It is all the more important together to fight against the preparations for war and the danger of a global war that could tear the whole world into the abyss. Ordinary people, regardless of the country, whether workers, refugees, women, children, young people... have nothing to gain in a war between NATO and Russia.

The imperialist blocs are concerned with markets and resources, not, as they try to make us believe, with democracy and human rights.

Come to the nationwide peace demonstration against the acute danger of World War III!